Posted at 06:30h in Uncategorized by rhyan 0 Comments
0 Likes

Welcome to WordPress. This is your first post. Edit or delete it, then start writing! ... 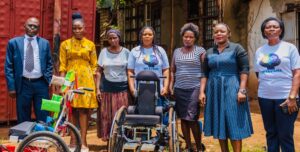 “We take this opportunity to thank our partners for providing these wheelchairs to support families in need. Wheelchairs change lives because they drastically improve accessibility which most people take for granted. Accessibility at home and outside homes is vital in enabling everyone to live as fully and comfortably as possible. The beneficiaries of these donated wheelchairs thank Leaf Tobacco and Commodities (U) Ltd from the bottom of their hearts.”

Leaf Tobacco and Commodities (U) Ltd noted that this was a modest contribution in line with its corporate social responsibility of supporting communities where the company operates.

ABOUT LEAF TOBACCO AND COMMODITIES (U) LTD

Established in 2001, Leaf Tobacco and Commodities (U) Ltd is a private limited company based in Kampala, Uganda. The company is part of the Pan African Tobacco Group (PTG) which operates across Sub-Saharan Africa in western, central, eastern, and southern Africa. PTG manufactures consumer goods across the Sub-Saharan Africa region in 7 countries, namely, in Angola, Burundi, DR Congo, Nigeria, South Sudan, Tanzania, and Uganda.

The story began in 2010 after requests were made by the community and school leaders for assistance in water provision and school infrastructure improvements. In line with the company’s corporate social responsibility, Leaf Tobacco and Commodities Nigerian Ltd was persuaded that supporting education was the right thing to do.

After a series of inspections and review visits, PTG’s subsidiary, Leaf Tobacco and Commodities Nigerian Ltd, decided to overhaul the entire school erecting a six-classroom block, administrative offices, and furniture, besides providing water and sanitation infrastructure. Crucially, community tap water facilities were part of the project to free children from walking miles to fetch water from rivers and concentrate on their schoolwork. Equally important, the monthly upkeep of teachers and non-academic staff became part of corporate social responsibility.

The school project was successfully completed and launched in 2015. The Nigerian government announced on September 15, 2015, that Leaf Tobacco and Commodities Nigerian Ltd” carried out its social responsibility very well.” The three-way relationships between Leaf Tobacco and Commodities Nigerian Ltd, community, government, and the school remain dynamic and healthy in 2019. PTG is grateful for the opportunities to work the Nigerian stakeholders and looks forward to a continued partnership.

For more details, click this button to see our video.
SOUTH SUDAN GOVERNMENT WELCOMED CARNAK’S SOLIDARITY IN THE BATTLE AGAINST COVID19

Tribert Rujugiro Ayabatwa: “African governments and the private sector have to join forces to ensure that no families go hungry during this crisis.”

“Today we, in the Taskforce , are joined by M/s Carnak(SS) in solidarity to fight against the spread of Covid-19 in South Sudan. I welcome the representatives of Carnak and warmly receive their contribution. This support is timely and very significant to enable us to facilitate the operations of the Team, particularly the Technical group handling the operations. Thanks once again for coming all the way from Yei River County to Juba to hand in your contribution.”

The Chairman of PTG-hld, the parent company of Carnak, Tribert Rujugiro Ayabatwa, has held strong views since the outbreak of the Coronavirus. Ayabatwa maintained that fighting the virus was not the responsibility of governments alone. As he explains, ”these are unprecedented times requiring exceptional collaboration between governments and the business community. The work to be done, and the material and financial resources to get the job done are too enormous. Only through a collective effort will the African continent end this pandemic.”

South Sudan and Africa as a whole are uniquely impacted by the Coronavirus. African countries do not have the financial resources to fight the virus as in rich countries of Europe or North America. Furthermore, most workers in Africa earn daily wages which is not possible during the Covid19 lockdowns. That is why governments and the business community have to jointly mobilize resources to ensure that families do not go hungry. African families should not face the tragic choice of being healthy or going hungry.

PTG JOINED THE BATTLE AGAINST COVID19 IN NIGERIA

PTG-hld, through Leaf Tobacco and Commodities Nigeria Ltd (LTCN), has joined the battle against Covid19 in Nigeria. LTCN already has a long and distinctive history of CSR partnerships with the Kaduna State government, in the field of education and water access. This time, the company decided to aim its CSR contribution to the statewide battle against Covid19.

Leading the government team at the State House to receive LTCN’s contributions was SSG Balarabe Abbas Lawal and the Permanent Secretary for Special Duties. The contributions included food and medical equipment like PCR machines, ventilators and X-ray machines. More food contribution would be sent the following week to the company’s immediate community in Gbakura.

Reacting to the donation, SSG Balarabe Abbas Lawal revealed that it was the single largest donation made to aid the state relief efforts to date. Going further he said.

“The Kaduna State Government does not have enough words to say thank you. This donation shows that you are good partners in business. As you know, there is no state government that can do everything. On our own end, the governor has approved millions of naira that we have used to purchase relief items, and we have distributed them – and yet it’s like we have not done anything, due to the size of the population affected. CSR gestures like this will go a very long way in assisting the government of Kaduna State. We appreciate your efforts and we can only thank you very much.”

PTG’s contribution to Nigeria’s battle against Covid19 is timely. As of April 22, 2020, 782 Nigerians were infected, against 25 deaths, and 197 recovered. Meanwhile, PTG continues to join government leaders to battle Covid19 in countries where it does business.

Pan African Tobacco Group: “African governments and the private sector have to join forces to ensure that no families go hungry during this crisis.”

On June 3, 2020, Barco Trading Angola delivered its contributions to the government of Angola in its battle against Covid19. As of June 11, 2020, Angola had 118 Coronavirus cases and 41 recoveries. The Vice Governor of Huíla Province, Maria João Francisco Chipalavela received the company’s contribution. Together with Mariana Soma, Agriculture Director for Huíla Province, Vice Governor Chipalavela was very appreciative.

In her remarks, she welcomed the representatives of Barco Trading Angola and warmly received their contribution comprised of a variety of foodstuff and sanitary materials. She said that the company’s support was timely and significant and will enable the government to fight Covid19 by improving Angolan lives in these challenging times. She further stated that the generosity of Barco Trading Angola sets an example to others.

The Chairman of PTG-hld, the parent company of Barco Trading Angola, Tribert Rujugiro Ayabatwa, has held strong views since the outbreak of the Coronavirus. Ayabatwa maintained that fighting the virus was not the responsibility of governments alone. As he explains, “these are unprecedented times requiring exceptional collaboration between governments and the business community. The work to be done, and the material and financial resources to get the job done are too enormous. Only through a collective effort will the African continent end this pandemic.”

The management of Barco Trading Angola thanked the Vice Governor and her team for receiving them. The management believes that it is on the right path not only in the fight against Covid19, but also in deepening the ongoing corporate social responsibility. A good example is the agriculture project at Matala. The purpose is mentor and coach communities to adapt better farming methods so that they can uplift themselves from poverty. This work continues at a good pace.